Biden's Biggest Nightmare Is One He Didn't See Coming 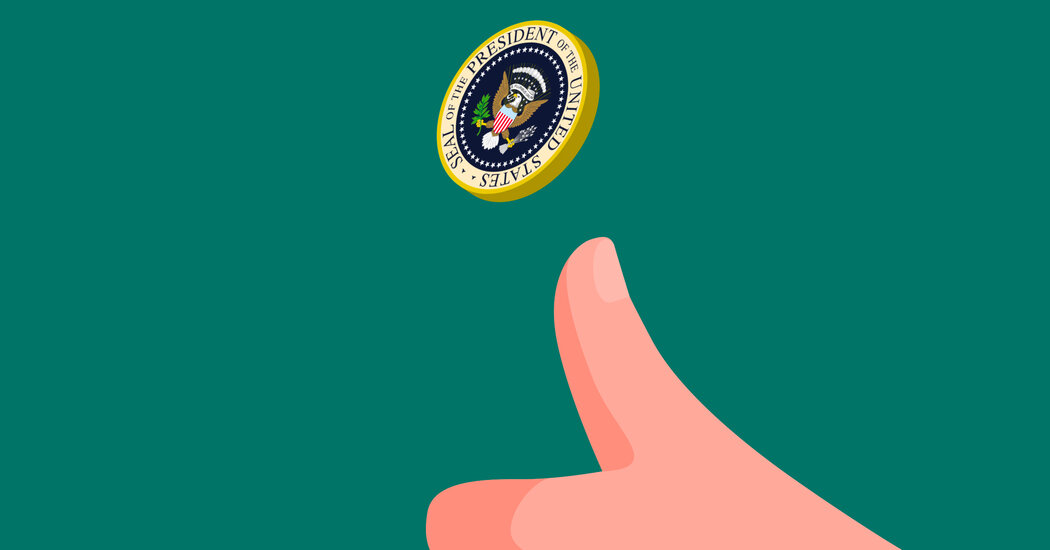 As Joe Biden campaigned for the White House in 2020, he knew that the next president of the United States would govern under circumstances significantly more daunting than those that most faced.As he took the oath of office in 2021, he could see very clea…

As Joe Biden campaigned for the White House in 2020, he knew that the next president of the United States would govern under circumstances significantly more daunting than those that most faced.

As he took the oath of office in 2021, he could see very clearly — in the tally of Covid-related deaths, in the economic and social devastation of the pandemic, in the country’s vicious partisanship — the immense scope and immeasurable difficulty of the work ahead.

But he surely never expected this.

Never expected war in Europe. Never expected a confrontation with Vladimir Putin of such urgency and unpredictable proportions. Never expected that his stack of challenges would grow this much taller, in this particularly terrifying way.

He delivered his first formal State of the Union address on Tuesday night as both a leader and a lesson: Few who have taken a seat at the Resolute Desk end up reading from anything like the script they had first imagined for themselves — or that others had imagined for them. Presidents plan. History laughs.

Or weeps or screams — those seem the more appropriate verbs now. Whatever the language, I look at Biden and I not only examine someone in what the journalist John Dickerson, in the title of his 2020 book, calls “The Hardest Job in the World.” I also behold someone in history’s crucible, learning or relearning what every candidate should know and what every voter should factor into his or her calculations, which is how quickly events jag and how suddenly they judder.

Biden is in many ways a propitious fit for current events. It’s useful, at this fearful juncture, to have a decidedly even-tempered president with his broad perspective, which has thus far prevented a potentially catastrophic overreaction to Putin’s saber-rattling.

It’s useful to have a president with his regard for institutions and NATO specifically. The Western alliance has been more united than Putin or just about anybody else wagered it would be, and Biden gets some credit for that. As John Avlon, the author of the new book “Lincoln and the Fight for Peace,” told me, “This is reflecting his experience and at least some of his intended strengths.”

But Avlon agreed that Biden belongs to a long line of presidents tugged far off script. Avlon reminded me that President Woodrow Wilson had once famously said, “It would be an irony of fate if my administration had to deal chiefly with foreign affairs.” Well, fate went full-throttle ironic in the form of the First World War.

“It’s almost always foreign affairs,” Avlon, a senior political analyst and anchor for CNN, said, “because the process of campaigning is almost always about domestic affairs.”

President George W. Bush, in his bid for the White House, questioned “nation building” in foreign lands, sounded somewhat isolationist at times and emphasized aspects of his persona that complemented a relatively prosperous, peaceful chapter of American life. Then came the terrorist attacks of Sept. 11 and the invasions of Afghanistan and Iraq.

President Jimmy Carter, whose appeal was largely as an ethical correction after President Richard Nixon, found himself dealing with stagflation at home and the Iranian hostage crisis abroad.

We elect presidents — or should — not just for the moment but for any moment, because the moment changes in the blink of an autocrat’s ego. It did for Biden.

“No president had delivered his State of the Union address with such a large-scale and consequential land war underway in Europe since 1945,” Peter Baker wrote in The Times, describing just how unusual Biden’s situation suddenly is.

Also in The Times, David Sanger weighed in: “Eastern Europe was not the battlefield Mr. Biden had in mind when he raised the idea last year that the battle of ‘autocracy versus democracy’ would be the defining foreign policy principle of his administration.” No, the scheming of Donald Trump, not Putin, was undoubtedly front of mind.

Dickerson, the “Hardest Job” author and the chief political analyst for CBS News, told me that when Biden took office, Afghanistan and “trying to orient the West’s focus — his focus — toward China” were top priorities. “Land war in Europe was not on that agenda,” he noted.

“Having said that, all the planning that he’s done in his career, the building of alliances, the team he put together: Implicit in their approach to the world is that the presidency surprises you with things all the time,” he added. “This is a job of surprises.”

For the Love of Sentences

Seems fitting to begin with Russia and Ukraine. So we shall.

David Brooks, in The Times, cast Ukrainians’ lot as emblematic and metaphoric of “a global struggle against authoritarianism,” and he stressed “the need to defeat the mini-Putins now found across the Western democracies. These are the demagogues who lie with Putinesque brazenness, who shred democratic institutions with Putinesque bravado, who strut the world’s stage with Putin’s amoral schoolboy machismo while pretending to represent all that is traditional and holy.” (Thanks to Karen Coe, from Seattle, for nominating this.)

In The Washington Post, Sally Jenkins endorsed a particular punishment of the Russian president, writing that there’s “nothing trivial about wiping Vladimir Putin’s musky perspirations from the international sports stage.” She continued: “His brand of shirtless belligerent patriotism — his macho nationalism — has been a long con, and it’s no small thing to knock him off medal podiums and expose the lifts in his shoes, or to rip off his judo belt and show the softening of his belly.” (Phil Carlsen, South Portland, Maine)

And in The Wall Street Journal, Peggy Noonan wrote this about Putin’s big going-to-war speech: “It had the wound-up particularity of the local grocer when he talks about his 30-year feud with the butcher down the street.” (Steve DeCherney, Chapel Hill, N.C.)

Leaving Ukraine but sticking with foreign figures and affairs, here’s Henry Mance, in The Financial Times, on Prince Andrew’s botched spin of his onetime friendship with Jeffrey Epstein: “Still, Andrew went on TV, and said that he didn’t regret his friendship with Epstein because of ‘the opportunities that I was given to learn, either by him or because of him.’ Yes, say what you will about Hannibal Lecter, he threw very original dinner parties. Andrew is so tin-eared that he could sell mining rights to his own head.” (Chris Durban, Paris)

And here’s Andrew Cohen, in The Globe and Mail of Toronto, on the much smaller Canadian city of Ottawa: “In one enterprise after another, Ottawa falls short. It is easily satisfied with mediocrity. As New York was said to be a town without foreplay, Ottawa is a city without climax.” (Bill Weaver Dresden, Ontario)

Now to matters gustatory. On his website, Garrison Keillor reflected on fine music and his anticipation of an imminent breakfast, noting that “this bagel is turning into the high point of my day, the bagel of all bagels, the bagel Hegel would’ve finagled with Puccini’s cream cheese and scallions that win medallions from Italians.” (Tom Sigafoos, County Donegal, Ireland)

And in The Times, Margaret Renkl pondered food and Lent: “During their midlife years of creeping weight gain, my mother and father would announce that they were losing 10 pounds for Lent, a goal I always found hilarious. As a Lenten resolution, it did bear some resemblance to the fasting and sackcloth of the early days of Christianity, if not for an entirely spiritual reason. I’m no theologian, but I feel sure that Jesus did not spend 40 days and 40 nights in the desert so he could fit into his old jeans.” (Tom Powell, Vestavia Hills, Ala., and Andrea Ondak, Newtown, Conn.)

To nominate favorite bits of recent writing from The Times or other publications to be mentioned in “For the Love of Sentences,” please email me here, and please include your name and place of residence.

What I’m Reading (and Doing)

On a Personal (By Which I Mean Regan) Note

There is or was or will be a squirrel in this tree. With Regan, you never know.Credit…Frank Bruni

The skeptical read on those of us with dogs is that we’re gluttons for guaranteed affection. We’re after easy, unconditional love.

Not so with me and Regan — and I think we’re more representative than exceptional. When I welcomed her into my life three years ago, I felt an urge to give unconditional love.

That tug was inextricably tied to my suddenly compromised and imperiled eyesight. With my physical powers in question, I wanted to flex my emotional might. I also wanted to avoid the traps of self-pity in particular and self-indulgence in general, and I could be only so concerned with my own welfare when I had to lavish thought and energy on hers. Just as my heart needed more bounce in it, my head needed less Frank in it. Regan did double duty in that regard (and thus gets a significant role in “The Beauty of Dusk”). She was the catalyst for a generosity that was at odds with, and offset, any sense of enfeeblement.

From the very start, I was much more focused on how well I was serving her than on how well she was serving me, and I couldn’t have predicted how satisfying it would be to figure out the riddle of which healthy foods might suit her sometimes finicky appetite; to whisk her to the vet when she was ill and make her better; to find a hiking trail that invigorated her more than other paths had; to see her sleeping peacefully for hours on end in a dog bed that I had chosen wisely and put in the right place.

Before Regan, I’d puzzled over how gaga some people could be about dogs who displayed all sorts of problems and unpleasantness, but that was because I’d misjudged those relationships, which weren’t about what surefire, ready-made bundles of joy dogs were. No, dogs were acts of devotion.

I don’t have any science on this, but I bet we’re flooded with more serotonin or dopamine or endorphins or all of the above when we say “I love you” than when we hear it. And we’re healthier people when we’ve made commitments beyond ourselves. We’re better still when we’ve kept them.

I vowed that Regan would never lack for exercise, and she hasn’t, not even during a four-day period about two years ago when a skin infection turned the lower part of my right leg into a badly inflamed, insanely tender slab of misery. Morning and night, I took her into Central Park regardless, and I limped and winced, winced and limped, laughing inwardly at the joke and spectacle of me, a man whose left half functioned perfectly well but whose right half — bum eye, bum leg — was a disaster.

I vowed that I wouldn’t travel excessively for work or pleasure and that when I did need to leave her, I’d forge arrangements that minimized the disruption. I followed through on that as well.

I vowed that she’d get plenty of time with other dogs and with people in addition to me, so that her world wasn’t a small one. That, too, has come to pass.

Schooled in the limits of my control over my own life, I have exercised my control over hers with all the diligence I can muster. Her tail wags and my spirits do a jig. Mercy comes in many forms, some of them four-legged.

Build a New City or New Humans? A Utopia in India Fights Over Future

We’re All Sinners, and Accepting That Is Actually a Good Thing