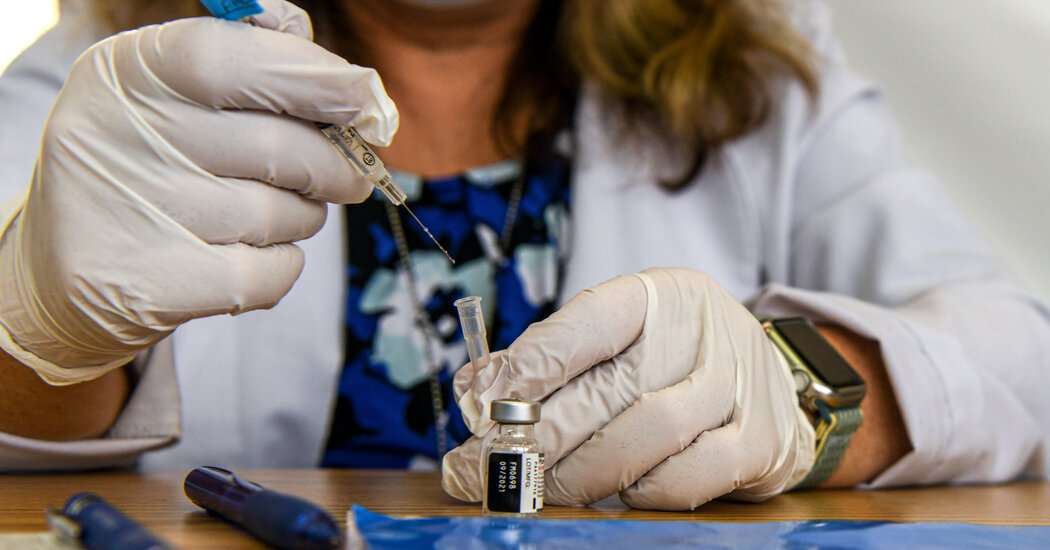 Republicans forced the vote even though the measure has no chance of enactment, as part of an election-year effort to use pandemic precautions as a political weapon against Democrats.

WASHINGTON — The Senate voted on Wednesday to roll back President Biden’s vaccine mandate for health care workers at federally funded facilities, in a symbolic move orchestrated by Republicans who are pushing to weaponize pandemic precautions against Democrats in this year’s midterm congressional elections.

In a vote forced by Republicans, the measure passed 49 to 44 along party lines, after six Democratic absences left the majority party short of the votes needed to defeat it. The measure is all but certain to die in the Democratic-controlled House; even if it cleared that chamber, the White House said on Wednesday that Mr. Biden would veto it.

But Republicans relished the opportunity to hit back against vaccine mandates across the country, seeking to advance their argument that the Biden administration and Democrats have overstepped in their efforts to control the spread of the coronavirus.

The Supreme Court, which blocked the Biden administration from enforcing a much broader vaccine-or-testing mandate for large employers, said in January that the mandate for health workers could remain in place. It applies to hospital workers and those at other health care facilities that receive funding through Medicare and Medicaid.

Vaccines have been proven safe and effective in stemming the spread of the coronavirus, and several medical experts said the mandates had been successful in persuading more people to get vaccinated.

But opponents of the mandate for health workers have cited concerns about staffing shortages at hospitals, as well as the fear of penalizing workers who have been on the front lines battling the spread of the virus.

“This vaccine mandate is not about public health or science,” Senator Roger Marshall, a Kansas Republican who is a physician, said in a speech on the Senate floor, a stethoscope draped around his neck. “The Biden administration’s mandate is about fulfilling their desire to control every aspect of our lives. And it’s a slap in the face to the hard-working men and women who never took a day off in the frontline fight of the Covid-19 battle.”

Most of the Republicans who voted in support of the measure have made a point of disclosing their own vaccination status, stressing that their opposition was rooted in objections about federal overreach. But the party has struggled to stop vaccine misinformation and skepticism within its ranks and to make the distinction between opposing vaccines and rejecting a federal mandate.

In December, two centrist Democrats joined Republicans in voting to scrap Mr. Biden’s vaccine-or-testing mandate for large employers, although the House did not take up the measure. And in recent weeks, there have been signs that Democrats are worried about the political implications of being perceived as heavy-handed enforcers of vaccine and mask mandates.

Democratic-led states and local governments have relaxed pandemic restrictions and encouraged voters to adjust to the presence of the virus in society. Ahead of the State of the Union address on Tuesday, the House ended a mask mandate that had been in place for more than a year.

A new U.S. strategy. The White House unveiled a virus response strategy that aims for a “new normal,” but much of it will need congressional funding. The plan includes a “test to treat” initiative that would provide antiviral medications to patients as soon as they learn they are infected.

Vaccine protection in adolescents. Five months after immunization, two doses of the Pfizer vaccine appeared to offer virtually no defense against moderate illness caused by Omicron among adolescents aged 12 to 17 years, according to new C.D.C. data. Booster shots, however, dramatically increased the protection.

Around the world. As Hong Kong sinks under its worst Covid wave, the brunt is falling on its most vulnerable: migrants, racial minorities and the working class. In New Zealand, violence broke out as the police moved to end a weekslong protest against vaccine mandates.

“We will never give up on vaccinating more Americans,” Mr. Biden pledged during the speech before a joint session of Congress. He pleaded for lawmakers to “stop looking at Covid as a partisan dividing line” and “see it for what it is: a God-awful disease.”

But undoing the vaccine mandate for health workers was a step too far for all of the Democrats present on Wednesday, including Senators Jon Tester of Montana and Joe Manchin III of West Virginia, who both had voted to roll back the vaccine-or-testing mandate for large companies.

“I think if you have hospitals with people that are carrying the coronavirus, it’s kind of counterproductive,” Mr. Tester said.

The backlash against the series of requirements for American workers to get vaccinated in order to keep their jobs has nearly derailed the Senate’s work on crucial funding legislation, as Republican senators have threatened to delay measures keeping the government open over the issue.

Mr. Marshall and his Republican colleagues used a once-obscure law, the Congressional Review Act, to force the Democratic-controlled Senate to hold the vote on rolling back the mandate for health workers. The law allows Congress to overturn a regulation with a simple majority in both chambers, without facing the threat of a filibuster in the Senate.

Catch up on the latest news on Ukraine.

Ambulance wait times are as long as a day in Hong Kong amid an Omicron surge.