Ken Duberstein, a Former Reagan Chief of Staff, Dies at 77 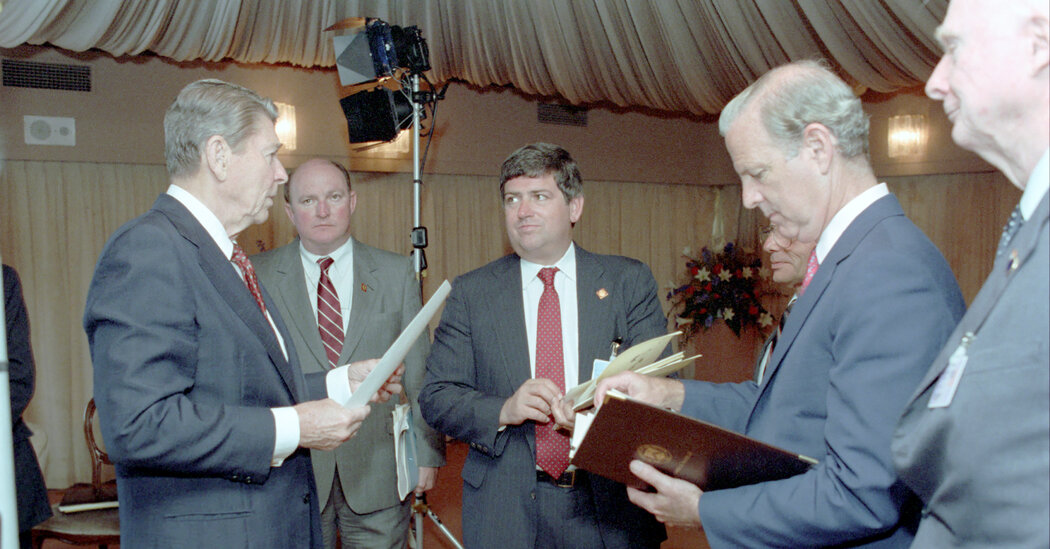 He helped revive the Reagan presidency in its last years and became a respected lobbyist in Washington.

WASHINGTON — Ken Duberstein, a former White House chief of staff who helped resuscitate Ronald Reagan’s presidency and went on to become a successful lobbyist whose counsel was sought by leaders of both parties, died on Wednesday in Washington. He was 77.

His family confirmed his death, at Sibley Memorial Hospital, saying it had come after a long unspecified illness. He had struggled with a hereditary kidney disease and received a kidney transplant in 2014, with his son Andrew as the donor.

Mr. Duberstein was a consummate Washington insider and institutionalist, a big man with an easy smile and a generous laugh who could be hard-nosed, loved gossiping with reporters, believed in bipartisanship and offered his advice to anyone who asked — especially those who succeeded him in the chief of staff job, which he often described as being a “reality therapist” for the president.

“There are many so-called ‘wise men’ in Washington, but Ken was the real deal — not only because of his wisdom, but because he always delivered it with a smile and an encouraging pat on the back,” said Ron Klain, President Biden’s chief of staff. Referring to his own administration, he added, “I felt like he was rooting for us to succeed.”

Mr. Duberstein had joined the Reagan White House in 1981 as the president’s liaison to the House of Representatives, where he helped push through an extensive tax cut by getting conservative Democrats, known as blue dogs, to break with their party.

He later left the White House to work as a lobbyist, but at the entreaty of former Senator Howard H. Baker Jr., then the chief of staff, Mr. Duberstein returned in 1987 to help “rescue Reagan in his time of trouble,” as Lou Cannon of The Washington Post wrote at the time. The Reagan presidency was floundering, in part because of public backlash over the Iran-contra scandal, the administration’s clandestine scheme to sell weapons to Iran at inflated prices and use the profits to supply Nicaraguan rebels, or contras.

Mr. Duberstein helped persuade Mr. Reagan to give a “mea culpa” speech that helped turn the presidency around. Mr. Duberstein was later named chief of staff, in July 1988, and served until the end of the Reagan presidency. He is believed to be the first Jewish person to hold that position.

Mr. Duberstein appeared on “Meet the Press” in 2004.Credit…NBC

Brooklyn-born, Mr. Duberstein was a Republican in the mold of Gov. Nelson A. Rockefeller of New York — fiscally conservative, socially moderate. Even before Donald J. Trump was elected president, Mr. Duberstein was not shy about breaking with his party.

He endorsed Barack Obama for president in 2008 after Senator John McCain, the Republican nominee, picked Sarah Palin, then the governor of Alaska, as his running mate. In an interview with NBC at the time, Mr. Duberstein questioned both Ms. Palin’s qualifications and Mr. McCain’s judgment, saying Ms. Palin had been offered the job after just one interview.

“Even at McDonald’s, you’re interviewed three times before you’re given the job,” he said.

Republicans and Democrats alike paid tribute to Mr. Duberstein after his death. Caroline Kennedy, who worked closely with him when Mr. Duberstein chaired a senior advisory committee for the Institute of Politics at Harvard University’s Kennedy School of Government, called him a “constant and inspiring presence” to students.

Kenneth Marc Duberstein was born on April 21, 1944, the son of Aaron Duberstein, a fund-raiser for the Boy Scouts of America, and Jewel (Falb) Duberstein, a homemaker. He grew up loving New York hot dogs and Broadway shows, often paying for standing-room-only tickets, said his wife, Jacquelyn Fain Duberstein. In his later years he became a trustee for the Kennedy Center for Performing Arts in Washington.

After high school at the private Poly Prep Country Day School in Brooklyn, he attended Franklin & Marshall College in Lancaster, Pa., graduating in 1965. He obtained a master’s degree in political science at American University in Washington the following year. There, he had his first taste of Capitol politics — as an intern for Senator Jacob Javits, Republican of New York.

“He would get in the car with Javits and drive him in order to have some time with Javits alone,” his wife said. “That’s how his love for government started.”

In addition to his wife, Mr. Duberstein is survived by four children, Jennifer, Jeffrey, Andrew and Samantha Duberstein; and two grandchildren. He was divorced from his first wife, Marjorie Duberstein, and from his second, Sydney Duberstein, who died earlier.

Ronald K. Brown Has a Mantra: ‘Absolute Victory Every Day’