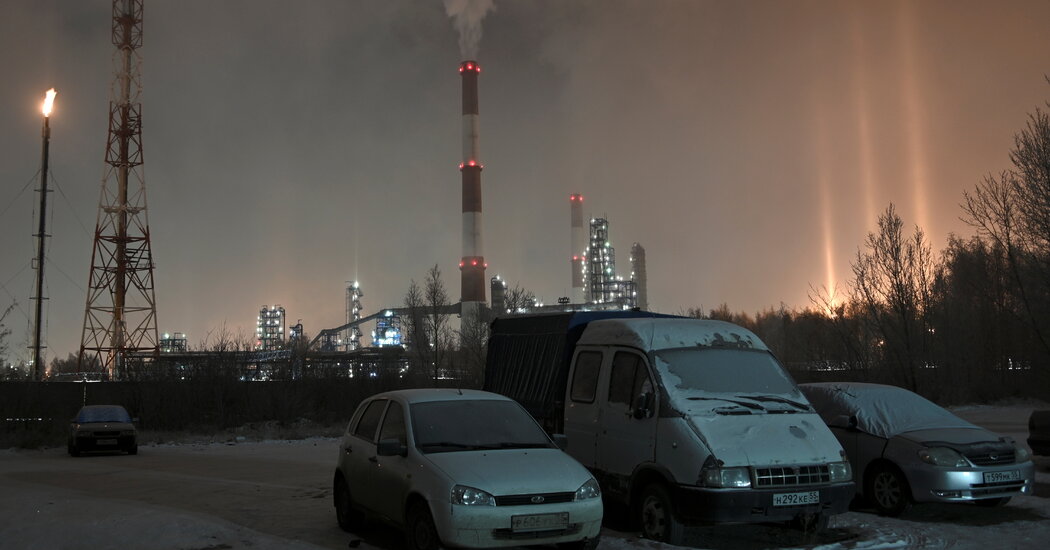 Republicans and Democrats on Capitol Hill are pursuing the ban to punish Russia for its invasion of Ukraine, but the White House is opposed, warning of energy price spikes.

WASHINGTON — Republicans and Democrats in Congress are pushing President Biden to ban Russian energy imports as they search for new ways to punish Moscow for its bloody invasion of Ukraine, even as the White House resists the idea, which it argues would drive up the price of gasoline and other energy costs for Americans.

The effort reflects a furious, bipartisan backlash on Capitol Hill to President Vladimir V. Putin of Russia and his unprovoked offensive in Ukraine, an attack that has left thousands dead and sent 1 million Ukrainians fleeing from their country in just a week.

The growing momentum behind the effort, which experts have said would be largely symbolic, also underscored how few tools both Congress and the White House have at their disposal as they grasp for new ways to weaken Mr. Putin.

Russian energy represents a small fraction of American imports, and Moscow is already having trouble exporting its oil even in the absence of sanctions, as traders, insurance companies and refiners slash purchases of Russian crude for reasons ranging from reputational risk to the safety of tankers in a war zone.

Still, the drive on Capitol Hill continued to pick up support on Thursday. It gained its highest-profile supporter in Speaker Nancy Pelosi, Democrat of California, who endorsed the move at her weekly news conference, telling reporters: “I’m all for that. Ban it.”

Across the Capitol, 18 senators, evenly divided between Republicans and Democrats, unveiled a bill to declare a national emergency and prohibit the importation of Russian energy.

“There is a moral obligation here,” said Senator Lisa Murkowski, Republican of Alaska and a co-sponsor of the bill, as she described how Russian forces had bombed hospitals, schools, and residential buildings. “I don’t want U.S. dollars to be funding this carnage in Ukraine.”

Many of the lawmakers calling most vocally for such a ban — and for helping American oil producers fill the ensuing void by lifting restrictions on oil and gas drilling in the United States — were either from the top oil- and gas-producing states in the nation, or facing difficult re-election battles this year.

“I’m all for it. Ban it,” Speaker Nancy Pelosi said of a ban on Russian oil imports.Credit…T.J. Kirkpatrick for The New York Times

At the White House, Mr. Biden and his advisers continue to resist calls for more aggressive sanctions on Russian oil, saying they are worried that it would send gas prices spiking.

“Our objective and the president’s objective has been to maximize impact on President Putin and Russia while minimizing impact to us and our allies and partners,” Jen Psaki, the White House press secretary, said. “We don’t have a strategic interest in reducing the global supply of energy, and that would raise prices at the gas pump for the American people around the world, because it would reduce the supply available.”

Senator Joe Manchin III, Democrat of West Virginia and a lead author of the legislation to ban Russian energy imports, angrily rejected that rationale, calling the statement “irresponsible,” and adding, “They are so wrong — so wrong.”

“When you talk about an inconvenience,” Mr. Manchin said at the Capitol, “can you imagine if you lived in Ukraine right now?”

Republicans have separately sought to tie the Biden administration’s opposition to both banning Russian gas and opening up new drilling to higher prices at the pump.

“This is about replacing Russian oil with American and North American resources that this administration has stifled,” said Senator Rob Portman, Republican of Ohio.

Ms. Psaki added on Thursday that the administration had not eliminated any option and was looking for ways to cut American consumption of Russian energy, but only “in the context of maintaining a steady global supply of energy.”

The 700,000 barrels of oil a day the United States imports from Russia represents less than 4 percent of American consumption and roughly 14 percent of Russian petroleum exports. Those lost barrels could be replaced by the planned release of strategic reserves and increased imports first from Canada, Brazil and Colombia, and eventually African producers if needed.

“It would essentially be meaningless,” said Michael C. Lynch, the president of Strategic Energy and Economic Research. “Oil is fungible, and we’ll just import more oil from Africa and/or South America.”

He said a ban could lead to declines in American inventories for a week or two, while refiners and traders replaced the Russian oil from other places.

A Ukrainian city falls. Russian troops gained control of Kherson, the first city to be overcome during the war. The overtaking of Kherson is significant as it allows the Russians to control more of Ukraine’s southern coastline and to push west toward the city of Odessa.

Russia’s advance. Russian troops encircled the strategic port city of Mariupol. A military convoy that has come within 20 miles of Kyiv appeared to have stalled in place, stymied by what British officials described as “staunch Ukrainian resistance, mechanical breakdown and congestion.”

The conflict and Beijing 2022. A Western intelligence report said that China told Russian officials not to invade Ukraine before the end of the Beijing Olympics, indicating it had some knowledge about Russia’s intentions. Separately, in a quick reversal, the organizers of the Paralympic Winter Games barred athletes from Russia and Belarus from competing.

A symbolic vote. The United Nations General Assembly adopted a resolution condemning Russia’s invasion of Ukraine, with the support of 141 countries out of 193. The vote, which is not legally binding, reflected Russia’s growing isolation on the international stage.

That would raise prices at the pump temporarily, Mr. Lynch added, but those prices would probably rise anyway if the crisis continues.

Russia is already having trouble exporting its oil even in the absence of an American embargo. The price for the Russian flagship Urals crude has collapsed, with global refiners halting their purchases of oil from the country. Banks, insurance companies and tanker fleets are refusing to finance and carry Russian crude for fear that sanctions will tighten. And the threat that the war could escalate makes shipping oil and other goods in the Black Sea increasingly dangerous.

None of that has stopped Republican lawmakers from pressing Mr. Biden to open up domestic drilling. They have cast doing so as a way to both kneecap Mr. Putin and seize an economic opportunity at home.

“Never in the history of warfare have we had a chance to deliver such a decisive blow,” Senator Lindsey Graham, Republican of South Carolina, said at a news conference on Wednesday. “Let’s land that blow. If the Ukrainians can stand up to a tank, if a grandmother can get a rifle, surely to God we can produce more oil and gas.”

Cars filling up at a gas station in Brooklyn on Thursday. President Biden and his advisers are concerned that a ban on Russian oil could drive up gas prices.Credit…DeSean McClinton-Holland for The New York Times

American oil producers have been slowly increasing output in recent months, while adding scores of new rigs to drill for oil and natural gas, especially in the Permian Basin straddling Texas and New Mexico. But oil production remains below 2019 levels preceding the pandemic, which slowed the economy and energy exploration and production.

Oil executives, under pressure from investors, have balked at raising production to much higher levels because in the past, such moves have flooded the market and undercut commodity prices. Instead, oil executives have returned recent profits to shareholders as increased dividends while they bought back shares to raise their stock prices.

A strong proponent of that strategy has been Scott D. Sheffield, the chief executive of Pioneer Natural Resources, one of the leading producers in the Permian Basin. In an interview on Thursday, he shifted his position slightly in light of the Russian invasion of Ukraine.

Mr. Sheffield said his company still intended to increase production a modest 5 percent per year over the next few years. But he added, “If there is a coordinated effort by all the western countries to ban Russian oil and gas exports, we would participate in helping Europe out to increase our production over the next two to three years.”

He cautioned, however, that such efforts would take time, noting that the industry was hamstrung by a shortage of labor and the sand needed for the hydraulic fracturing process used to extract gas from hard shales. “When you add a rig, it takes six months to get your first drop of oil out,” he added.

The United States currently produces nearly 12 million barrels of oil a day, about 60 percent of national demand, and it is now a net exporter of both oil and natural gas.

Who Should Be Allowed to Transition?

Lukoil, a Russian Oil Company, Calls for an End to the Ukraine War