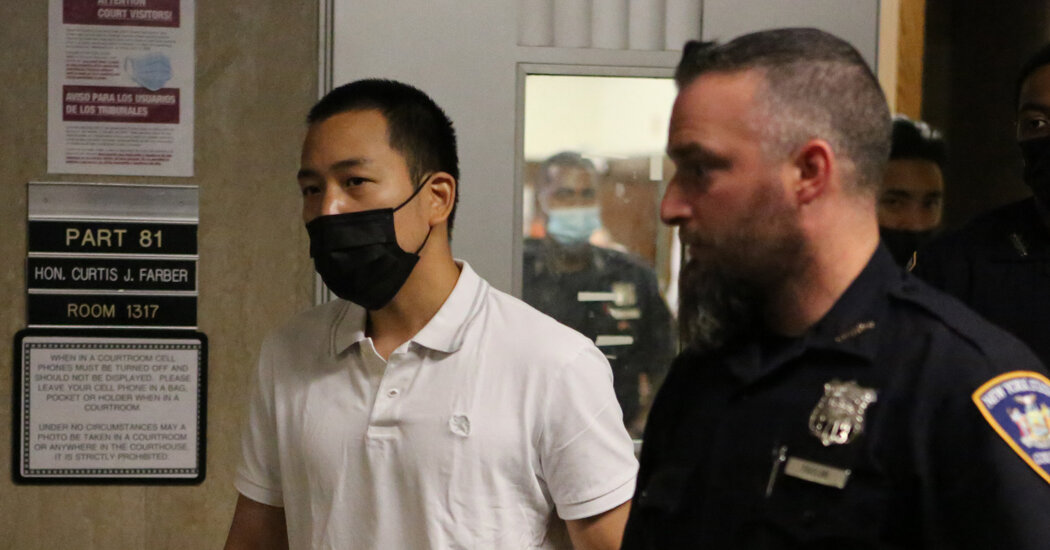 Sgt. Phillip Wong punched one handcuffed man after being spit at and knelt on another who had taunted him with anti-Asian slurs.

In one of the attacks, the sergeant, Phillip Wong, punched a man in the face when he was in a cell, according to court records. In the second, he knelt on the back of a man who was shouting “I can’t breathe” on a subway station floor. Sergeant Wong acted after being spit at in one instance and taunted with anti-Asian slurs in the other, the authorities said.

Announcing the charges last year, Cyrus R. Vance Jr., the Manhattan district attorney at the time, acknowledged the provocations but said they did not justify the sergeant’s response. On Wednesday, Mr. Vance’s successor, Alvin Bragg, reiterated the point.

“Law enforcement officials are sworn to serve and protect their communities, including New Yorkers in their custody,” Mr. Bragg said in a statement. “In this case, Sergeant Wong violated not only his oath — but the law — during the violent arrests of two New Yorkers.”

Sergeant Wong, who joined the Police Department in January 2006, pleaded not guilty when the charges, third-degree assault and third-degree attempted assault, were filed. It was unclear what led him to change his plea. His lawyer, Andrew C. Quinn, did not immediately respond to a request for comment.

The arrests at issue in the case occurred before the police killing of George Floyd touched off nationwide protests over persistent racism in the criminal justice system and the aggressive tactics officers have sometimes used to restrain suspects.

In New York, the most prominent example in recent years of how deadly such tactics can be involved Eric Garner, a Black resident of Staten Island who died in 2014 after one officer placed him in a chokehold as others tried to handcuff him. “I can’t breathe,” Mr. Garner begged repeatedly before dying, a call for help that became a national rallying cry.

Police Department rules have long banned the use of “any pressure to the throat or windpipe, which may prevent or hinder breathing or reduce intake of air,” except in extremely limited circumstances. Officers are trained not to sit, kneel or stand on people’s heads, backs or chest. They are prohibited from using force to retaliate or against handcuffed detainees, except to avoid injury, stop an escape or overpower a person who is resisting.

Sergeant Wong appears to have flouted those rules in one of the arrests in which he was charged, according to an account of both episodes provided by the district attorney’s office.

That arrest, in April 2020, occurred at a Manhattan subway station, where an officer under Sergeant Wong’s supervision took a 35-year-old man into custody after seeing him punch a passenger.

As officers led the man from the station, he yelled obscenities and anti-Asian slurs at Sergeant Wong, and then kicked him in the leg. The sergeant and a second officer pushed the man, his hands cuffed behind him, to the ground.

With the man on his stomach, Sergeant Wong knelt on his back. The man continued to taunt Sergeant Wong, and then shouted, “I can’t breathe.”

Sergeant Wong — saying he did not care “if you can breathe or not” and using an obscenity for emphasis — punched the man in the face, then placed his knees on the man’s back and bounced on him repeatedly. The man was taken to a hospital, where staff members determined that he had not been injured.

In the other arrest, in October 2019, Sergeant Wong was among a group of officers who took a 48-year-old man and two other people to a Harlem precinct for arrest processing. He and two other officers put the man, who was handcuffed, into a holding cell.

As the officers closed the cell door, the man kicked it and began to spit at them. Sergeant Wong pushed past the other officers, opened the door and punched the man in the face. The man was taken to a hospital, where he received stitches for a cut above his right eye.

Justice Curtis Farber of State Supreme Court in Manhattan sentenced Sergeant Wong to two years’ probation and 70 hours of community service, and ordered him to undergo anger management or other counseling. The district attorney’s office had asked that he be sentenced to 60 days in jail.

Sergeant Wong is currently on modified duty, a police spokeswoman said. He was previously suspended for 30 days and faces the prospect of additional punishment, which, under the department’s disciplinary guidelines, could include being fired or forced to retire.

‘It’s Not About Me’: Scherzer Bucks a System That Worked for Him

What We Know About Brittney Griner’s Detention in Russia