The Salt, the Light, the Emptiness: Why We Love Red Hook 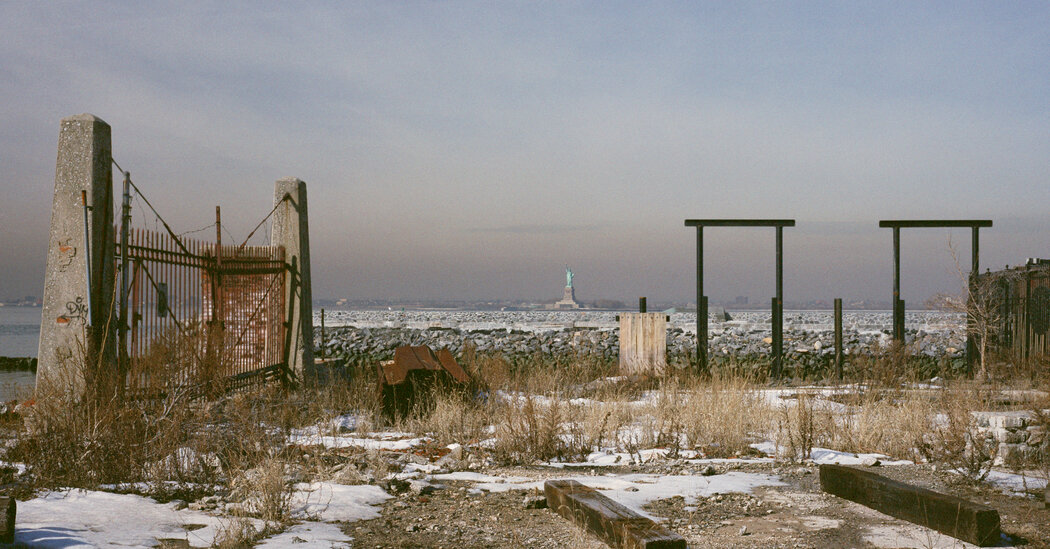 One doesn’t accidentally end up in Red Hook. It’s not a neighborhood you pass through on your way somewhere else. Unless you take a wrong turn coming out of the tunnel from Manhattan, it’s not a place you are likely to stumble across. It’s a destination. …

One doesn’t accidentally end up in Red Hook. It’s not a neighborhood you pass through on your way somewhere else. Unless you take a wrong turn coming out of the tunnel from Manhattan, it’s not a place you are likely to stumble across. It’s a destination. A choice. Or sometimes a fate, depending on where in the neighborhood you call home.

Despite its proximity to Manhattan, Red Hook — a Brooklyn enclave that juts into Upper New York Bay where it connects with the East River, right across the water from Wall Street — can feel like an industrial seaside town that time forgot. The weather is different. There is salt in the air. The storms are stronger, the rain heavier, the winterharsher. In the quiet hours, the horn from the Staten Island Ferry carries over the low rowhouses, the warehouses and the Houses, as the NYCHA Red Hook Houses are referred to locally. 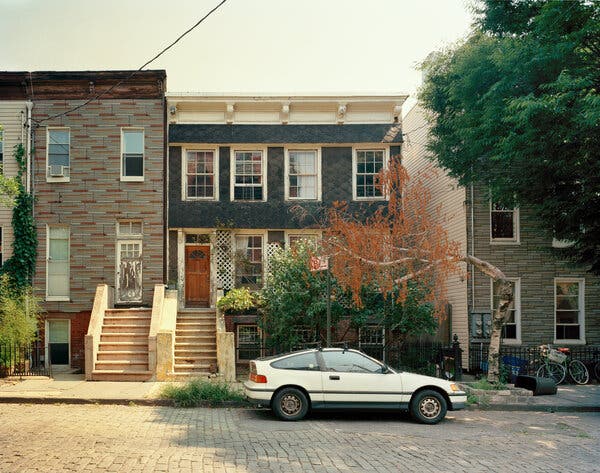 Every few weeks, at least before the pandemic, the Queen Mary 2 would dock at the Brooklyn Cruise Terminal, its enormous silhouette — 200 feet high and more than 1,100 feet long — visible down every intersection for six blocks, like a strange backdrop for a throwback theater show about sailors on the town.

Red Hook can be a sort of backdrop for the many who profess to love it. In the five years I lived there, I often found that the people who sang its praises the loudest were almost always visiting from some other part of the city. And that what they probably meant was they had spent an afternoon there. When pressed, they would probably describe spending the day at Ikea; browsing the handful of boutiques on Van Brunt; seeing a performance at Pioneer Works; getting a whiskey at the local distillery. Or they raved about Sunny’s, the famed dive bar that’s been around for more than a century, a perennially popular Red Hook hangout.

Maybe they’d arrived on the ferry. Or taken a long bike ride along the water, with its cinematic view of the Lower Manhattan skyline and the Statue of Liberty, marveling at the fishermen perched at the end of Valentino Pier. It’s a different world.

For those who live here, the love can be more tempered, even if the appeal is similar.

“You need a car” is most likely the first thing people who have bought homes will say if you inquire about moving here. It’s too far and too isolating, otherwise. There’s no subway in Red Hook, just the 61 bus. Life here is a compromise for those wanting to be away from the city without actually leaving it.

And yet the isolation and sense of emptiness are part of the magic.

It was the emptiness that initially drew the photographer Jade Doskow to the area in 2003. Working as a bike messenger at the time, she was entranced by the ghostly warehouses along the waterfront. “I wanted to photograph it all,” she says now.

What’s striking about many of the photos Ms. Doskow took over the course of her 13 years in Red Hook (she left in 2016) is how challenging it can be to pin them to a timeline. Without notes, it’s difficult to do before-and-after shots here. From many angles, Red Hook in 1986 looks like Red Hook in 2006 and Red Hook in 2016. A white 1980s-looking hatchback in front of a 19th-century rowhouse might have been snapped during the Reagan administration or yesterday. (It was taken in 2011, as it turns out.) The two-story red house with brick siding and a gated front window? It looks so familiar; you might feel like you walked this block yesterday. The picture is from 2009.

As New York continues to evolve into a city unattainable to all but the wealthiest, the throwback nature of Red Hook can make New York still feel possible, even if the skyrocketing housing prices belie this impression. The absence of visual progress also helps buttress a belief that the neighborhood is somehow unmoored from the history of the rest of the city, and instead is perpetually being discovered.

Indeed, over the years, Red Hook has lent itself to that favored American phrase “It’s like the Wild West.” As with most places where the term is applied, it largely functions as a description of erasure, saying more, perhaps, about our inability to recognize the people who were there than their absence.

And there have always been people in Red Hook. Called Ihepetonga by the Indigenous Lenape and Roode Hoek (red point) by the Dutch, it was, in the latter half of the 19th century, a bustling port, home to dockworkers of various nationalities and backgrounds. Many of the rowhouses still standing date to this time. In the 20th century, along with the disappearance of manufacturing, Red Hook suffered a similar fate to other parts of the city: Jobs left, and Robert Moses arrived.

In the 1930s, Moses, then the city’s parks commissioner and still under the sharp eye of Mayor Fiorello LaGuardia, included Red Hook in the list of neighborhoods where pool complexes would be built with money from the Works Progress Administration. The Sol Goodman pool, as it was later named (after a New York real estate mogul; is anything more New York than that?), opened in 1936, replacing a landfill locally referred to as Tin Can Mountain, which at the time of its demolition was also a Hooverville and home to 400 families.

My Eyes are Golden Pools (from which dreams pour), 2003
Construction, Halleck and Columbia, Red Hook, 2021

The pool remains in use in the summer, pulling in swimmers from neighborhoods on the other side of the Brooklyn Queens Expressway. (Last updated in the mid-1980s, the recreation center may finally be getting long-delayed upgrades.) At the start of the Covid pandemic, the enormous center was converted into one of the earliest mass testing sites in Brooklyn.

Initially, the pool was surrounded by parks and soccer fields — some of which remain and are being detoxified after decades of disrepair. The long-term plan had been to convert the area into a much larger recreation site, at least until 1938, when New York’s Public Housing Authority took possession of the land to the north — this time displacing 300 families — with the intention of building public housing.

The Red Hook Houses, which opened in 1939, were one of the earliest housing projects in New York, as well as the largest (they remain the largest in Brooklyn). At the time of construction, they were envisioned as a safe, clean, modern place to live, free from the unhealthy conditions that plagued the tenements. The first round of highly screened residents — the “deserving poor” — were mostly local Italian and Irish dockworkers. Eleanor Roosevelt toured the Houses in 1940; the great social realist Marion Greenwood painted a fresco for one of the lobbies titled “Blueprint for Living.”

In 1942, Red Hook’s fate as a remote enclave on the other side of the tracks was solidified when the Gowanus Expressway was pushed through, demolishing a swath of established neighborhoods. Eight years later the Brooklyn-Battery Tunnel was opened. Red Hook, until then a comprehensive part of the Brooklyn map, was now on its own, cut off.

They Keep Calling Me, 2004
New York Dock Company as seen from Verona Street, 2011

After Brooklyn’s working waterfront started an inexorable decline beginning in the 1960s, it fell into further disrepair. The coda to Hubert Selby Jr.’s brutal novel “Last Exit to Brooklyn,”titled “Landsend,” is about the people living lives of violent despair in the Houses.

In 1970, The New York Times reported on the rise of crime and the failed “crash” repair program the city had undertaken to remedy the living situation at the Houses. If New York in the ’70s and ’80s was dead, Red Hook was dead and forgotten.

In the ’90s, when young Manhattanites began venturing across the river in larger numbers, looking for affordable space in which to live and work (a story as old as the city), some stumbled on Red Hook and found much of it abandoned. Those who arrived in the early aughts will relay stories about packs of wild dogs roaming the streets. Though it was home to one of the largest public housing developments in the country, there was a stark lack of basic resources.

Ms. Doskow and her boyfriend routinely did their shopping at the Upper East Side Gristedes near his work before returning to the lofts where they had taken up residence. “You had to be very resourceful,” she said. In some ways, it was reminiscent of the emergence of SoHo in the 1970s, when artists moved into empty buildings and remade the neighborhood. But SoHo had subways. The isolation of Red Hook proved a persistent challenge, and the familiar story of promised regeneration was slow to materialize. It didn’t take hold until Fairway — a grocery warehouse geared to foodies — opened in 2006, followed by Ikea in 2008 and the arrival of ferry service.

Adaptability and resilience remain common attributes among those who live here. In the aftermath of Sandy, which battered much of New York but devastated Red Hook, many locals were without power for months. Neighbors shared generators and other resources. In the Houses, which saw six feet of flooding, 6,000 residents were left without not only heat but also fresh water. The flooding eventually resulted in hazardous mold — an issue that persisted for years after the rest of the neighborhood bounced back.

It’s partly the challenges that face Red Hook that give it the tight-knit feel of a small town. There is an active and vital Facebook group that functions as part classifieds and part community board. There is an annual old-timers’ day for the residents of the Houses. A year after the storm, the Barnacle Parade sprung up to commemorate Red Hook’s superstorm resilience; each October, handmade floats of pirate ships and sea monsters circle Red Hook’s streets, making stops at local businesses, which hand out treats (food and alcohol type depending on your age and persuasion).

The most distinctive before-and-after photos in Ms. Doskow’s set also tell viewers what they need to know about Red Hook’s future. Where there was an old sugar refinery, Amazon is constructing a “last mile” warehouse. Under cover of darkness, several 19th-century buildings on the waterfront across from Valentino Pier were demolished to make way for a UPS distribution center. Traffic along the narrow streets is increasingly choked by delivery trucks. In a neighborhood long defined by its inaccessibility, getting in and out is now arguably harder than it was when few people came down here at all.

And yet the light remains. Along Valentino Pier, fishermen pull in their catches, some of which are now edible. And in the small beach alongside, local dogs race into the waves to retrieve their sticks. The Red Hook sunsets remain the most spectacular in the city, and the Statue of Liberty stands steadfast and visible in the harbor.

Another Working Mom for the Supreme Court?

Capitalizing ‘Black’ Isn’t Wrong. But It Isn’t That Helpful, Either.