The Violence at Rikers That's Shrouded in Silence 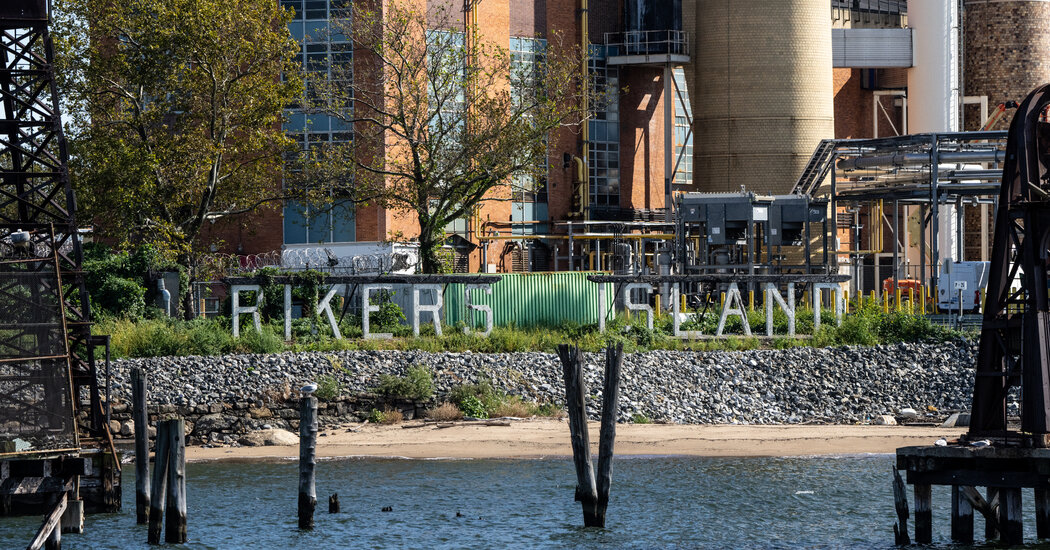 The jail’s system for reporting serious incidents has long been faulty, and recent incidents show horrific injuries are not always recorded.

Good morning. It’s Thursday. We’ll look at two criminal-justice issues — problems with the way violence on Rikers Island is documented, and allegations that a new parole law is being ignored. We’ll also hear what a Ukrainian-born city councilwoman told the state Republican convention. 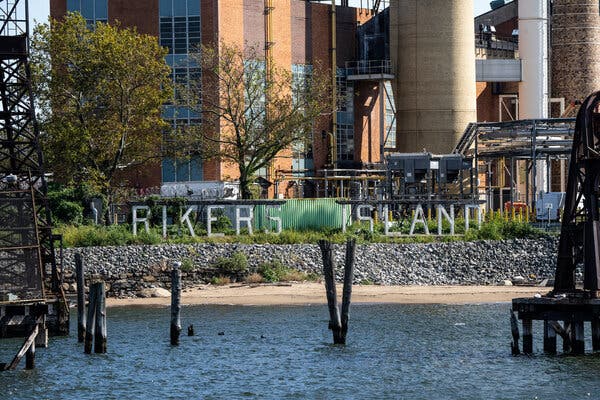 Is it possible that the brutality on Rikers Island is worse than had been known?

That was one takeaway from an article by my colleagues Jan Ransom and William K. Rashbaum, who write that a 41-year-old man being held there was paralyzed from the neck down after a beating. Another ended up in a coma after a fellow detainee slammed him to the floor and kicked him in the head.

Neither injury was documented properly. In the first case — in August, as Rikers descended into chaos — the inmate spent hours crying out for help, according to another cellmate who said he was certain he had witnessed what happened. In the other case, in December, guards put off filing a report — and when they did, it said no hospitalization had been required.

In fact, the man, who had been assaulted on the floor of his housing area, was taken to a hospital after he began having seizures. Doctors operated to relieve swelling in his brain. After six weeks in a coma, he had to learn to walk and talk again.

A Department of Correction spokeswoman said that both episodes were under investigation. Louis Molina, named jails commissioner in January by Mayor Eric Adams, declined to be interviewed but said in a statement that he had identified deficiencies within the department and intended to “correct the dysfunction” that he had inherited from the previous administration. He did not elaborate.

Bryanne Hamill, a former member of the Board of Correction, an oversight panel, said that city officials could not address the problems on Rikers without an accurate incident-reporting system.

But the system at Rikers has long had problems. In 2012, investigators with the Department of Correction concluded that a warden and his deputy had left hundreds of fights involving detainees out of departmental statistics, making the jail for adolescents at Rikers seem safer than it was.

In 2019, a review by the Board of Correction found that serious injuries sustained by people in custody were underreported.

And in January, The New York Times reported that jailers had failed to document “fight nights” — or the injuries that resulted when gang leaders forced detainees to participate.

“When individuals are not held accountable, they act with impunity, and that goes for staff and incarcerated people,” Ms. Townsend said. “Violence is going to increase, and it’s just going to continue this cycle of unsafe conditions.”

A new parole law is being ignored, lawyers say

The so-called Less Is More Act took effect this week. But lawyers for dozens who are being detained for parole violations said in a court filing that the state Corrections Department had disregarded parts of it.

Lorraine McEvilley, the director of the Parole Revocation Defense Unit at the Legal Aid Society, said in a statement that the department was “violating the spirit and explicit intention of this transformative law” by refusing to hold hearings for people detained on parole violations. The new law ended automatic jailing for minor violations like breaking curfew or missing an appointment with a parole officer.

Rachel Connors, a spokeswoman for the department, said in a statement that corrections officials did not believe state law required the hearings to be held for people detained before the parole changes went into effect. She said the department had been “proactive in applying the spirit of the law,” the first major criminal justice bill signed by Gov. Kathy Hochul after she replaced former Gov. Andrew Cuomo last year.

At the time, Hochul ordered the release of 191 detainees, most of whom had been held for parole violations. At least four people who died in custody in New York City during the pandemic were being detained for minor, or “technical,” parole violations.

Brian Benjamin, now the lieutenant governor, was the bill’s main sponsor in the State Senate. Hochul said when she signed the bill that it signaled a desire to change in the system. Some Democratic politicians and advocates questioned whether she still stood behind that idea, given that Republicans have tried to pit efforts to change the criminal justice system against rising public safety concerns.

“What’s troubling is that the governor is not intervening to uphold the letter of the law,” said Assemblywoman Phara Souffrant Forrest, a Brooklyn Democrat who sponsored the bill in the Assembly. “A lot of promises were being made, so now where you at?”

Hazel Crampton-Hays, a spokeswoman for Ms. Hochul, said the governor would see that the new rules would be applied “as written and passed by the Legislature.”

Expect a sunny day with temps in the low 40s, cooling down to the low 20s this evening.

New York Republicans gathered on Long Island this week to choose their designees for major statewide elected offices, in preparation for the primary contests in June and the elections in the fall.

As the designee for governor they turned to Representative Lee Zeldin, who voted to overturn the results of the 2020 election and opposed the creation of an independent commission to investigate the Jan. 6 insurrection — positions that could be explosive liabilities in a general election in overwhelmingly Democratic New York.

But Katie Glueck, Metro’s chief political correspondent, who covered the convention, says that a newly elected city councilwoman from Brooklyn generated some buzz of her own.

A city is captured. Russian troops gained control of Kherson, the first Ukrainian city to be overcome during the war. The overtaking of Kherson is significant as it allows the Russians to control more of Ukraine’s southern coastline and to push west toward the city of Odessa.

Military aid. Several countries are funneling arms into Ukraine, while NATO is moving military equipment and troops into member states bordering Russia and Belarus, amid rising fears that Russia might try to reclaim its sphere of influence in Eastern Europe.

American airspace ban. President Biden announced that the U.S. will ban Russian aircraft from flying through American airspace. The ban follows similar moves by the E.U. and Canada to shut airspace to passenger flights from Russia and to planes used by Russian oligarchs.

Russian convoy. Satellite images show a Russian military convoy stretching 40 miles long on a roadway north of Kyiv, with a number of homes and buildings seen burning nearby. Experts fear the convoy could be used to encircle and cut off the capital or to launch a full-on assault.

Councilwoman Inna Vernikov, who flipped a Southern Brooklyn seat last fall that is home to many immigrants from the former Soviet Union, identifies as a Ukrainian-born American Jew. And as the Russian invasion has unfolded, she has taken to television and the floor of the City Council to denounce President Vladimir Putin of Russia and to address the pain of the Ukrainian community in New York City, the largest such community in the United States.

At the Republican convention on Tuesday, some attendees regarded her as a breakout star as she detailed her family’s journey and touted her campaign victory as evidence of Republican potential. “As President Barack Obama used to say, ‘Yes, we can,’” she said. (This drew a laugh from the crowd.)

She implicitly referred to Putin when she said, “The people of Ukraine are suffering at the hands of a terrorist.”

“The Ukrainian people and the Russian people do not want this war,” she said. “They have tasted freedom and independence, and they want their country to be more like America and less like the Soviet Union. And so I’m here to do my part to make sure that America stays more like America.”

My friend had gotten a promotion at work, and I was taking him out to dinner to celebrate.

He chose a restaurant near Union Square that we hadn’t been to before, a small place with a limited menu. The special that night, pork Milanese, sounded delicious. That’s what I ordered when the waiter came to our table.

“I’m afraid I sold the last one,” he said, nodding toward the table adjacent to ours.

The woman sitting directly next to me shrugged sheepishly.

We all laughed. The waiter suggested I order the pork off the regular menu, and I did.

When our neighbors’ meals arrived, I made sure not to look their way for fear the woman might think I had misunderstood her joke to be a genuine offer.

After a few minutes, I felt her nudge me.

“Get in here!” she said, sliding her plate toward me so I could stab a bite. It was delicious.

When my meal arrived moments later, I asked if she would like to try it.

“Well, it’s only fair,” she said, taking a bite and chewing thoughtfully.

My friend was horrified by the exchange.

Glad we could get together here. See you tomorrow. — J.B.

P.S. Here’s today’s Mini Crossword and Spelling Bee. You can find all our puzzles here.

They Weren’t Wanted at the Paralympics but Are Excelling Anyway

Shane Warne, One of Cricket’s Masters of Spin, Dies at 52

Ken Duberstein, a Former Reagan Chief of Staff, Dies at 77

How Ukraine’s Military Has Resisted Russia So Far